Here is a brief trip report I put up on Washington Trails Association.


Pictures are up on Google+.

The trip really began at 4AM Thursday, when I got up to drive the 110 miles to the Wilderness Information Center in Marblemount, WA, to get in line early to get the permit. Permits are issued no earlier than 24 hours before the day you want to backpack and camp. I was the first in line at 6:30 and the WIC opened at 7. I picked up the free permit and borrowed a required bear canister to keep our food from the critters.

I drove back to Kirkland, worked until 4PM, and then drove back to Marblemount, grabbed dinner at a local restaurant, then drove the 24 additional miles to the trailhead in North Cascades National Park.

There I pulled out my camp chair, my camera, and a bottle of wine as I waited for the clear skies to darken. I shot a few star shots and was visited by a pesky deer a couple of times as well as a few mice looking for scraps. 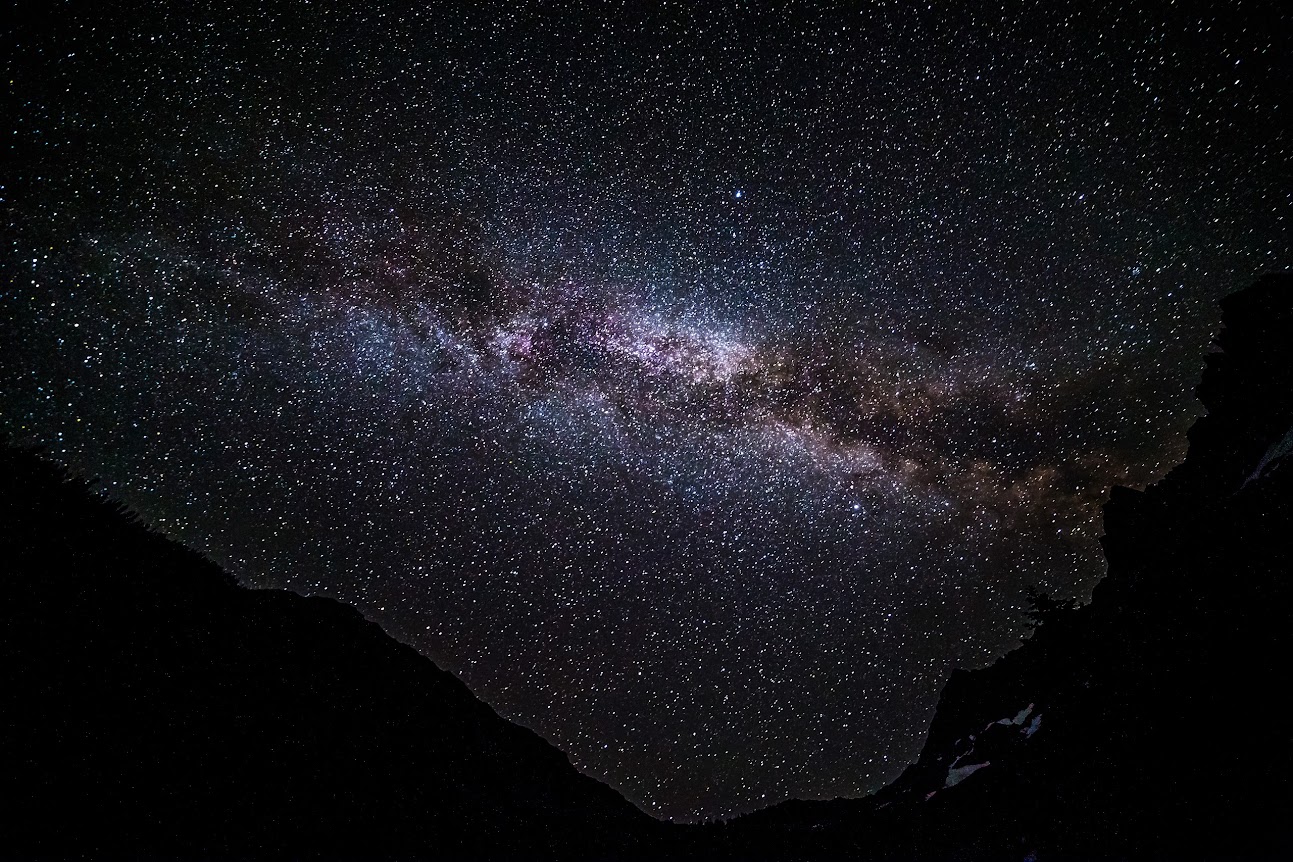 I then slept in my car, waiting for dawn to head up the mountain.

I woke up around 5:20 and gathered up all my gear and started up at 5:55AM, determined to be the first backpacker to the campsite area so I would have the best chance of getting a great site. A couple of climbers were already ahead of me; they were there to dayhike and climb Sahale Mountain.

This was the first time backpacking this year, and with the bear canister and all my camera gear, tent, food, stove and cooking gear, and all the other stuff, I guess my pack was around 55lbs. Not insane, but definitely more than you want to carry up almost 4,000 ft on your first outing.

I made the 3.7 mile hike to Cascade Pass within a couple hours or so, gaining 1,800 ft. About halfway through this part of the hike the smell of smoke became evident as the wind had reversed from west to east and smoke from the nearby Lone Mountain 1 fire near Stehekin was filtering through the pass into the valley.

Once at the pass, I rested a bit and then made my way up the steeper trail to Sahale Arm, the long semicircle left by a glacier, with Doubtful Lake at the bottom of the cirque. From here you can see the campsites 1.5 miles and 1,400 ft above you, high up on the south side of Sahale.

The trail meanders along the ridge and steeply climbs the last 900 ft over a half mile. Even with all the hiking and cardio work at the gym, I was surprisingly winded at this altitude and took far more breaks than I expected. Last year at this time I had easily summitted Adams at twice this altitude.

When I reached Sahale Glacier Camp, all this early effort paid off, as all the campsites were vacated and I chose the same site we had back in Sept, 2012. 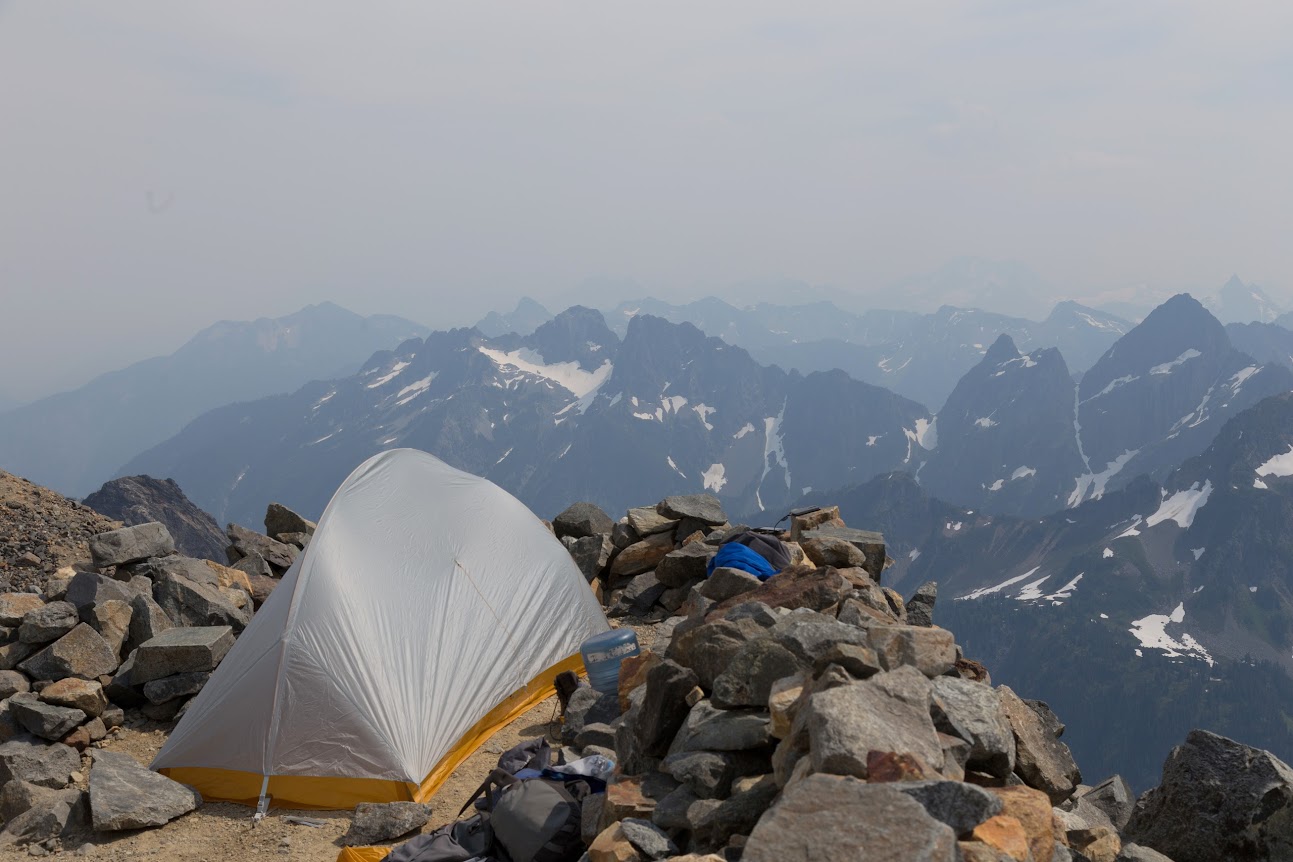 I dropped my pack and put up my new ultralight tent, which honestly is a difficult tent to set up within the confines of the rock-walled campsite. I knew it would be windy overnight, so I had to be sure to secure the lines to heavy rocks.

From this point on at around noon, I really had nothing to do but enjoy the view and wait for my friends Sharon and Becka to arrive. Soon other day-climbers and hikers arrived, and I chatted with most of them, as our campsite is the first one they come to, plus it has a great resting spot high on the ridge.

Climbers Will and Wayne arrived and set camp on the next moraine mound east of us. 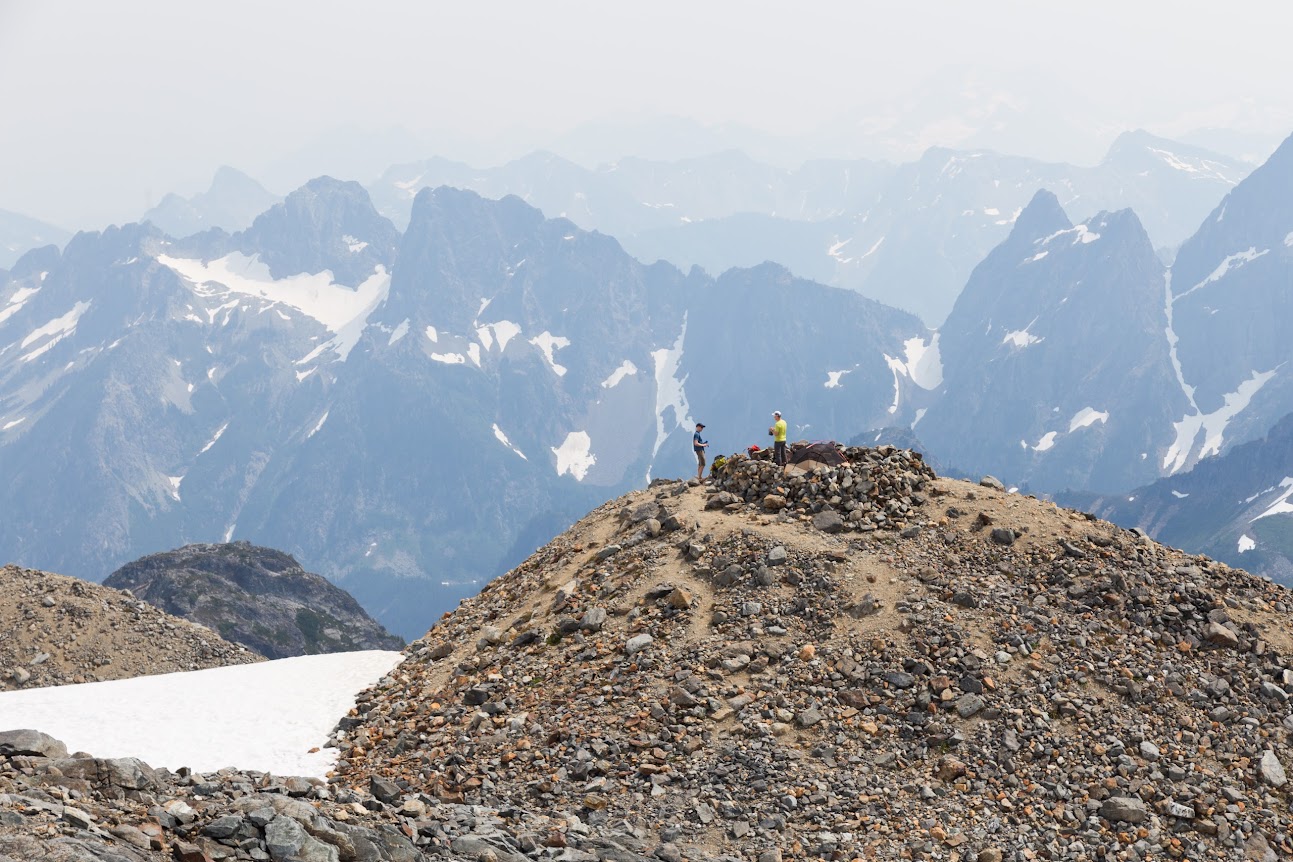 We chatted about their climbing adventures. They had designs on not only summiting Sahale, but traversing across the Horseshoe Basin and summiting Mt. Bucker the next day.

I patiently waited for Sharon and Becka to arrive, guessing they'd be up by about 4PM given their start in Seattle at around 7AM. Meanwhile, the skies were darkening under a 20% chance of thunderstorms.

Sometime in the afternoon I visited the glacier melt stream and fetch a few quarts of ice-cold water to cook with -- no need to filter up here; it's great right off the ice, snow, and rocks.

Other campers arrived and quickly filled up the 6 designated campsites. Two couples camped adjacent to our site and we all socialized and shared adventures.

With the storm clouds slowly approaching from the SE and rain shafts clearly evident and a few lightning strikes far away, Sharon and Becka arrived at around 6PM. 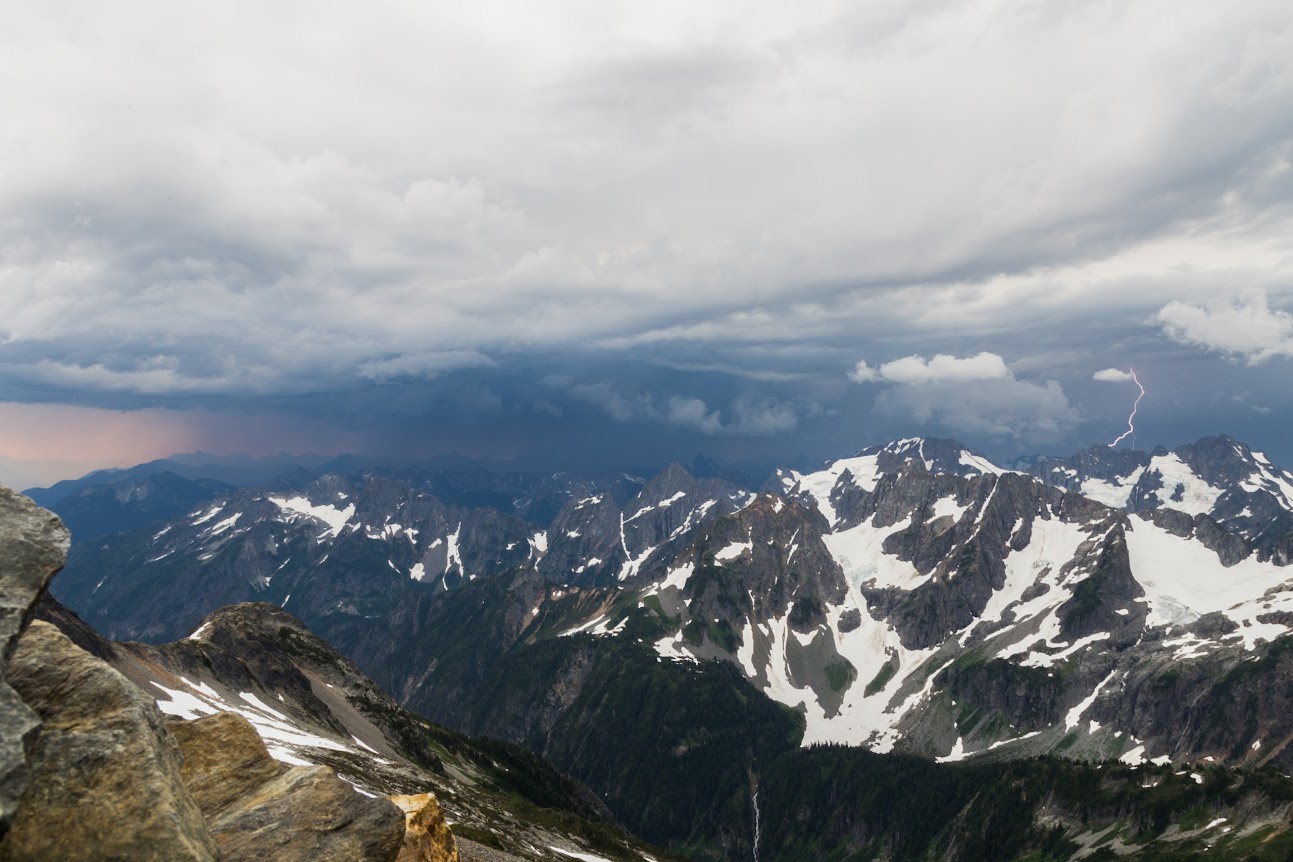 We got busy setting up their tent, which was actually my Marmot 2P tent. Sharon was test-driving before deciding to buy it from me.

Lightning and thunder become more pressing and the rain eventually moved in, so we all piled into Sharon's tent and continued drinking and chatting. We kept vigilant to estimate the distance of the lightning strikes, and were prepared to abandon the high ground of our mound for a safer area below. At some point we drank enough wine to decide that we cared less about the lightning and that being struck by lightning on a mountain while backpacking isn't such a bad way to go....

...But that wasn't to be. The closest strike was still about a mile away and the storm dissipated and we all exited the tent. Our neighbors were so enjoying drinks in their tents that I had to loudly announced "The rain has ended!" to encourage them to join us on the ridge for dinner.

As it goes when backpacking, at least as has been the case with me, we socialize as much as everyone wants to, and share whatever we bring. We cooked our freeze-dried concoctions and passed them around, continuing to share stories of hikes and climbs.

With the multiple layers of clouds remaining from the storms, we expected and were granted a beautiful sunset that evolved over about 90 minutes. All of us had our cameras and smartphones out shooting shot after shot until the sky faded. 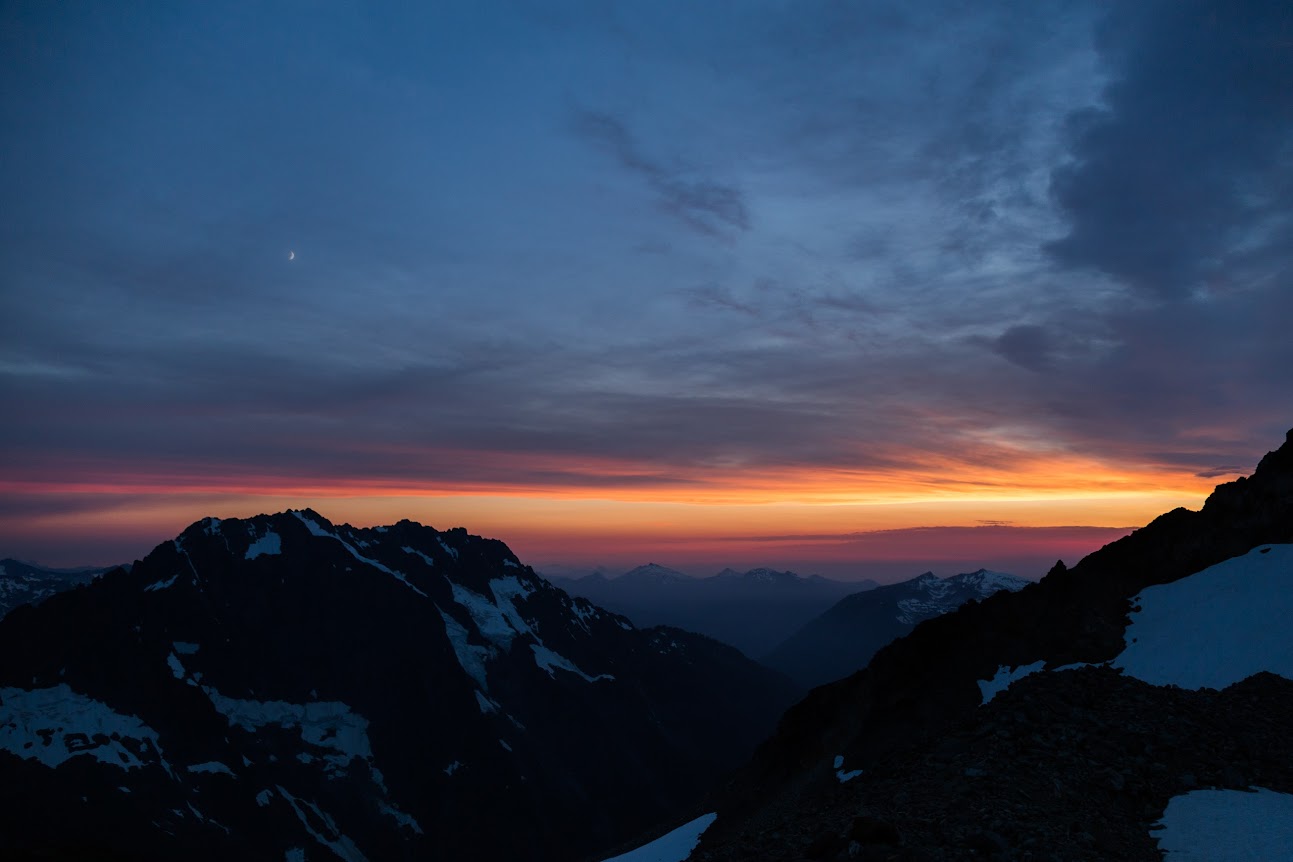 Sharon, Becka and I retreated to the tent and chatted and drank some more until we were done with the long day and called it a night.

The next day we staggered out of our tents, went to the melt stream to refill our water containers, and made coffee and breakfast, again enjoying it with our neighbors who sadly were leaving us later that morning. We saw them off and just sat around camp as the morning sun climbed higher.

A very bold marmot continued to visit us, unfazed at it walked within a few feet of each of us. Marmots, like goats, get their mineral intake from urine, so wherever we peed, the marmots and goats would go there and lick it up. And while there is a toilet at Sahale, it is not for peeing; we are encouraged by the Rangers to pee off the trail and on rocks, so we all more or less used a few designated spots that had varying degrees of privacy depending on which campsites were occupied. It's simply the way it is up there, well above the treeline.

At around noon or so, Saturday's dayhikers began to arrive, and we greeted them and were happy to take pictures of them with their cameras and smartphones. Some stayed only a few minutes, while others chatted with us about making plans to camp up there like we did. We really enjoyed the company and sharing it all with them.

New neighbors arrived where the ones from morning departed, and we quickly got on well with them, too.

While the day developed, so did the storms to the south, this time about three hours earlier than they did on Friday. With the forecast up to a 30% chance, we really expected to get some weather. But the storms never made it anywhere near us and remained to our south and east and the day wound down with another beautiful sunset. 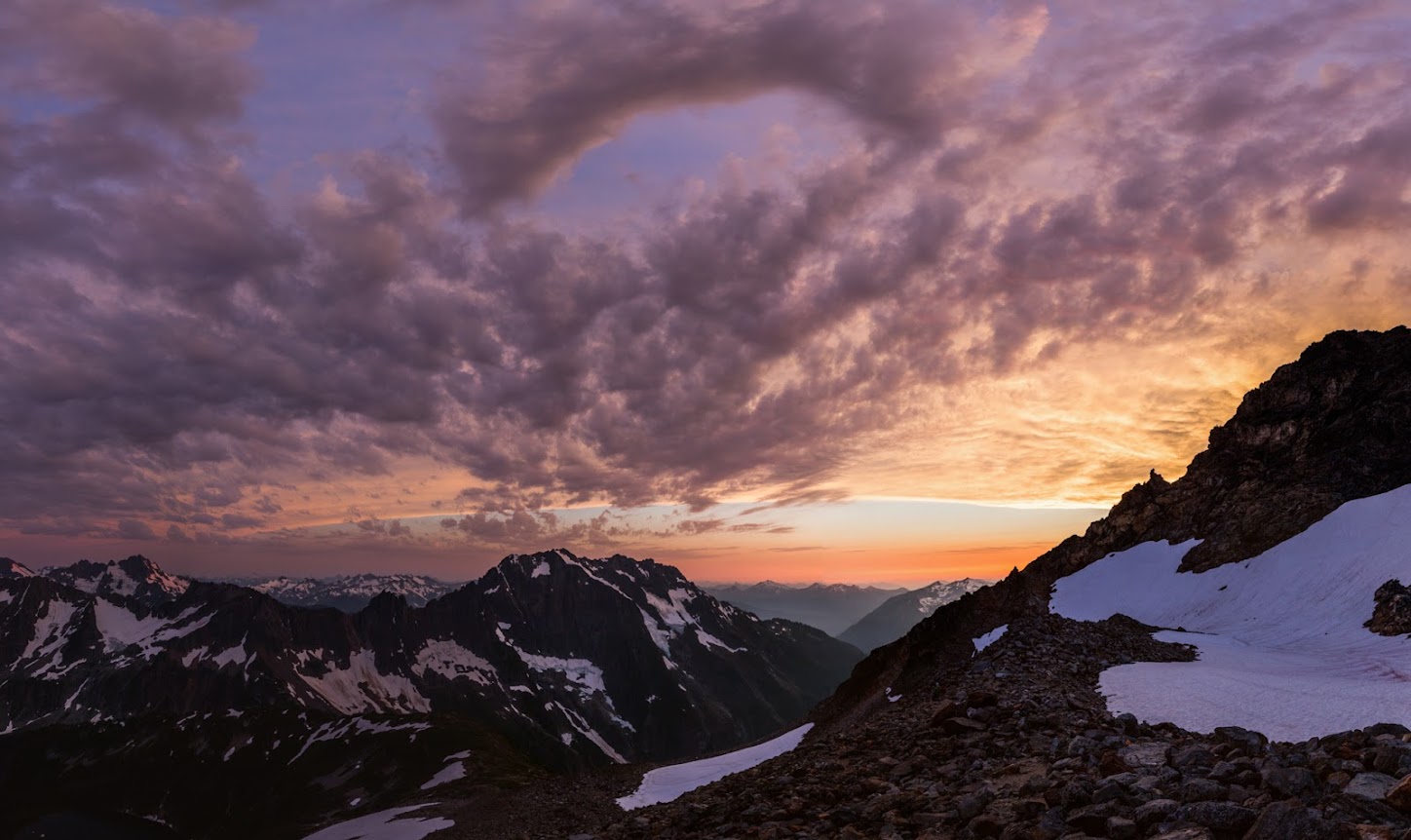 Before the sunset, and after the weather cleared up, our new neighbors summited Sahale, and upon their return we all got together and shared some more drinks and our dinners.

We again all enjoyed the sunset and retreated to our tents.

Sometime around 1AM I peeked through the tent fly to see clear skies and I had to take the opportunity to get some more star shots. The sky was very clear and smoke-free, as the wind has shifted back to the west. 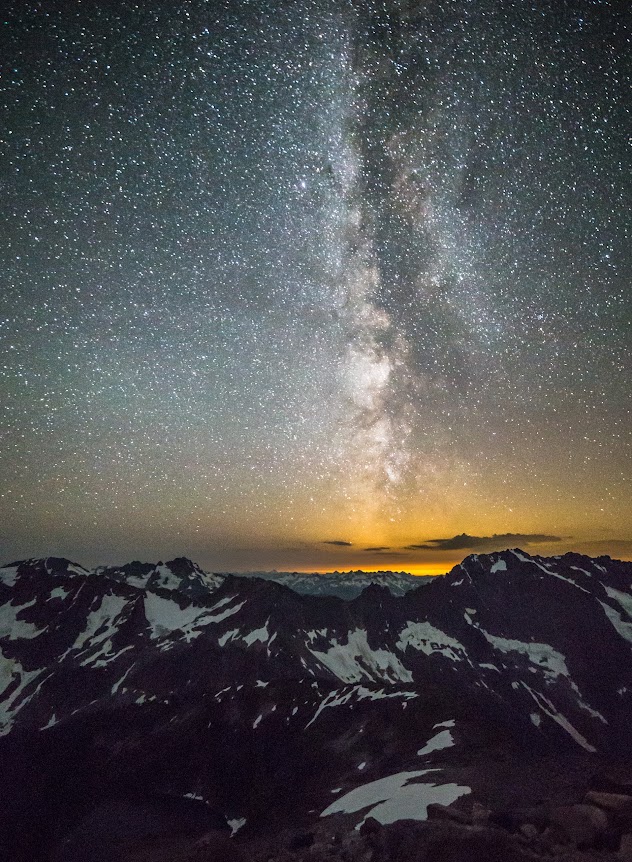 Later that morning but before dawn, I heard a couple of goats go right by our tent, though outside the rock wall, and could tell by their sounds that it was a baby and adult goat (assumed a nanny goat). They probably had their noses tuned to another pee spot just down from our campsite. Other critters, mainly mice, could be heard rummaging around our tent; Sharon discovered in the morning that some of her food that wasn't secured in the bear canister had been pillaged, including her coffee creamer and some trail mix.

Sunday morning was consumed with coffee, breakfast, and breaking camp. We were on the trail just before 9. We had some trepidation about the descent, as the trail is steep and comprised of unconsolidated scree and dirt in places. But with poles it was easy to manage. 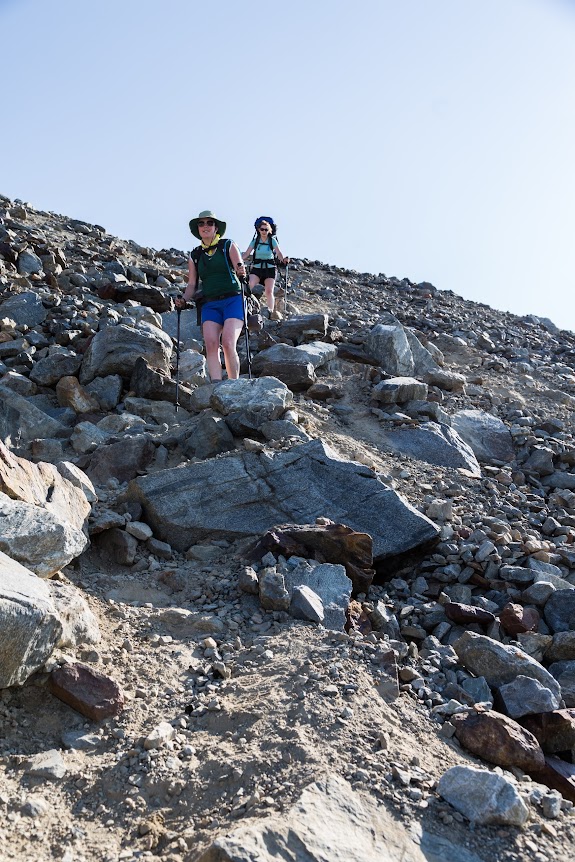 We ran into two sets of nanny/kid goats. The first one was off the trail, about 30 ft to the west. The second pair was munching some grass while standing on the trail. So I stopped dead in my tracks and could do nothing but wait. After about a minute or so, the nanny bounded up the ridge, but the kid stayed on the trail. And I stayed put. The nanny, from her higher vantage point, eyeballed me closely, almost daring me to approach her kid. 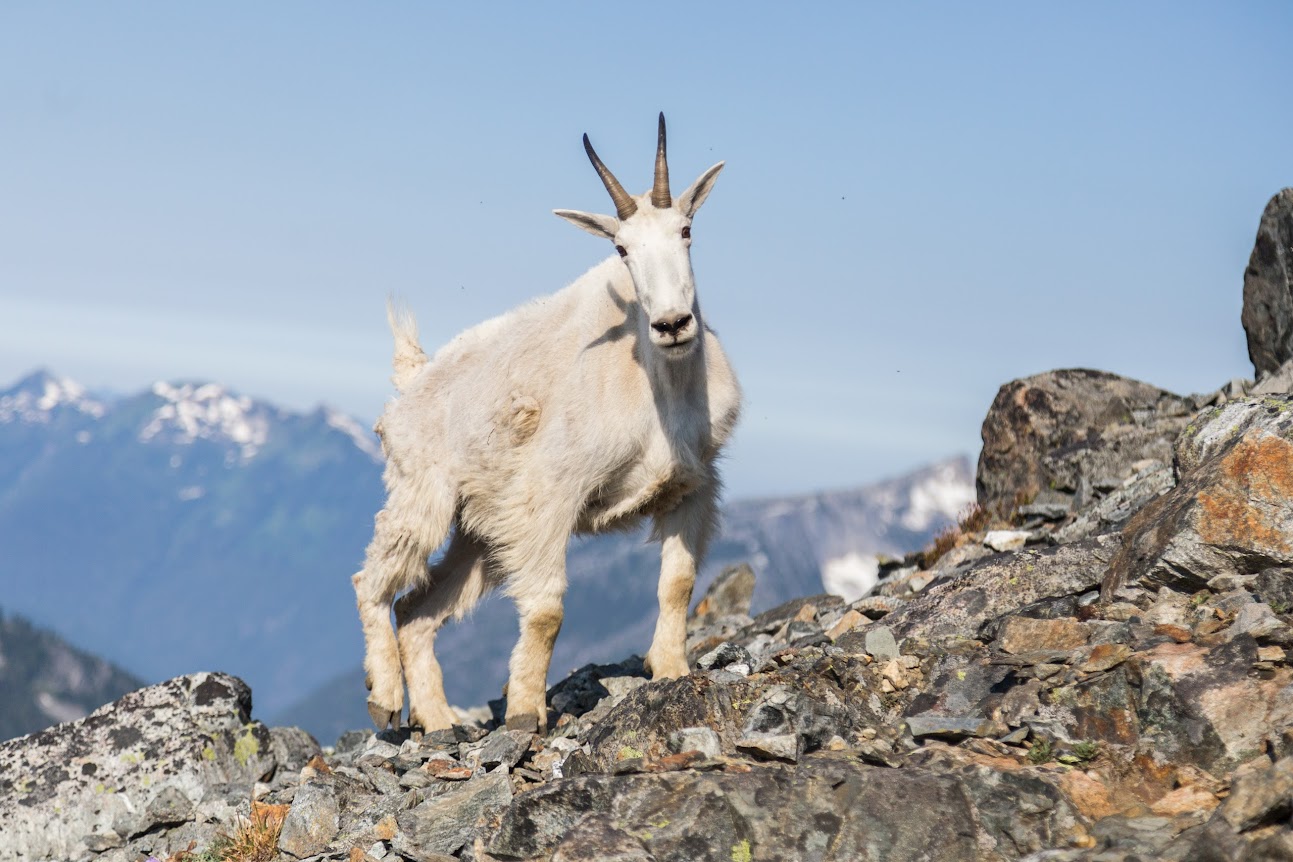 I did not take that dare. Soon the kid followed her mother up the ridge and we continued down.

The rest of the hike was uneventful. We stopped at the pass to get some more food in us, then we did the remaining 3.7 miles -- and 34 switchbacks -- back to the trailhead and our cars.
Posted by Ken P at 7:21 PM